A new and exciting look at Winchester’s long and turbulent history has been published by The History Press. “Bloody British History: Winchester” leads the reader on a disturbing journey through the city’s past; two thousand years of Winchester’s worst events, from hangings, burnings, kings and tyrants, to wars, disease and much more! The emphasis is on people and not buildings.

It is written by Winchester city tourist guides, Don Bryan, Geraldine Buchanan, Clare Dixon and James King. Winchester's tourist guides have been welcoming and guiding visitors around the city and district, giving talks and running local history courses for over 35 years but this is the first time that a book has been published under their auspices. 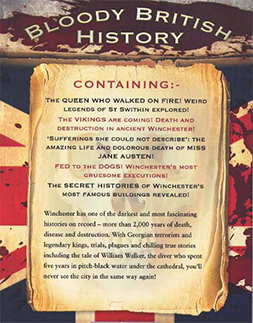 Order your copy of "Bloody British History: Winchester" which is now available in local bookshops and on-line priced at only £9.99.

Welcome to Winchester via our new video tour!

“Even as a Winchester local I learned loads and want to do more tours!!”  TripAdvisor review June 2019

“I took the morning walk and it was fabulous!”  TripAdvisor review March 2018